On our first day sightseeing in Munich, one of the worst nightmares for a family traveling with a baby happened: Our stroller broke. Yep, our trusty UPPAbaby G-Lite completely failed on us: 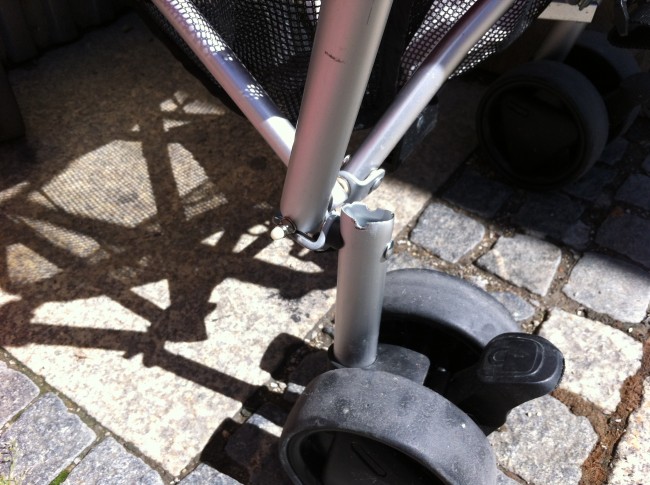 It happened while we were going down the steps to a church in the old town. There were only a couple steps, and being lazy, and jet-lagged, I decided I could get away with just hopping down the steps with our son still in it. After the first step, the post to the wheel sheared off, leaving us with a wrecked stroller.  We’re not sure if it was a design fault, user fault, or damage caused by the airline which weakened the frame on our flight in the previous day. We don’t blame the manufacturer, UPPAbaby, as we’ve had lots of other strollers from them without any problems (like the fantastic Vista)

So, we sat around and debated what to do for a while, and the best idea seemed to be to just abandon the stroller in situ. We stripped it of anything worthwhile (Survivorman style), folded it up, leaned it up against a wall, and walked away inconspicuously with a kid on foot.  Perhaps not one of our prouder moments of parenthood.

But now, we had two kids who needed strollers for the long walks, and only one stroller (our other, ironically older identical UPPAbaby G-Lite).  So, not wanting to lose the day, we pulled out the ErgoBaby Carrier we had on us, tossed one of the kids in there, and marched on.

With the day’s sightseeing mostly done, we turned our thoughts to replacing the stroller.  We had no idea where in the old city of Munich we’d be able to buy a stroller.  Google to the rescue – we found a stroller store called Schlichting very close by.  It was on a very fancy shopping street with all the upper end Saks 5th Ave. type stores, but we headed in anyways. 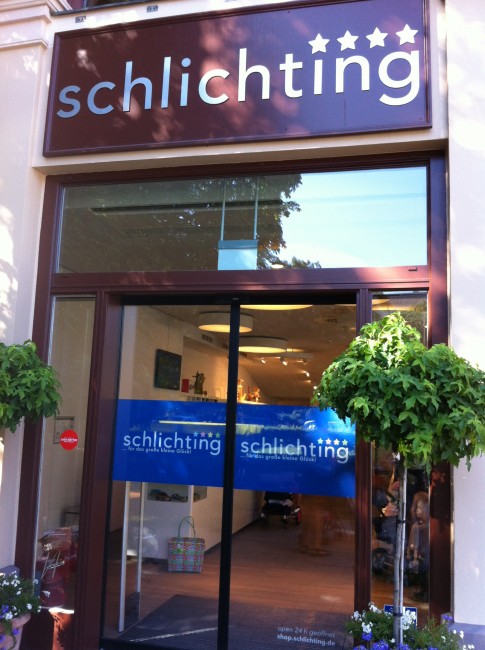 Inside, we found a high-end store with lots of baby equipment and a good selection of strollers.  Of course, in typical German fashion, there were toy trikes inside for the kids to play on while we shopped.  Most of the strollers were out of our price range, but we happened to find a Maclaren that met our price point (about 100 euros), and was pink enough that our daughter was enthralled. 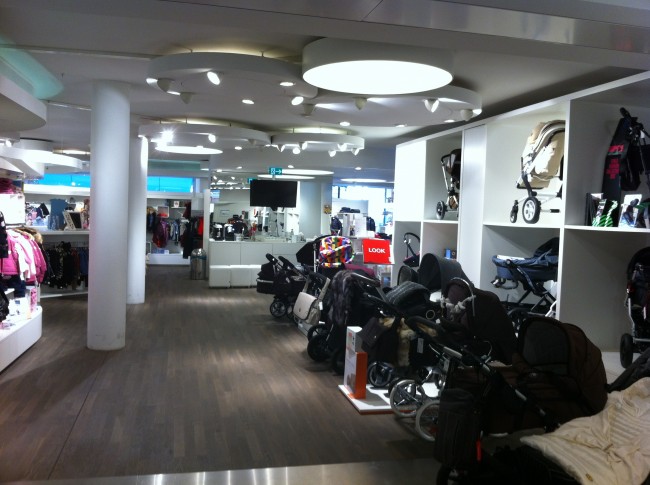 Inside the Schlichting Store

With our new (somewhat strange) souvenir, we headed to explore the English Garden and break it in.  Although we still have the stroller, it still baffles us that they would sell a shock-less stroller in cobblestone-ridden Europe – it’s such an awful thing to push a kid in around Europe!  But desperate times…