In the morning, we headed out to the Yongsan Elecctronics Market in Seoul.   It wasn’t really what I expected.  It is a collection of 20 buildings, and it wasn’t always clear how to get from one to the other.  The first building we went into was about 6 stories high (I’Park Mall), and is in the same building as the subway station..  We came in on the digital cameras floor (yes, floor).  At 10am the building was empty, and we could wander around peacefully checking out all the stuff we couldn’t afford.  This mall was very comfortable, bright, organized, and easy to get around. The prices were about on par with prices in California, but they had some models that hadn’t yet been released in the US/Canada, and the salespeople were happy to show them off to us.  There’s another floor of cell phones (fun for wandering, but not for shopping, as Korea is on an entirely different system).  There’s another floor for computers.  There’s even a section devoted to toilet bowl lids.  (you won’t see that at Best Buy!).

Attached to this part of the mall was also a regular mall, but we didn’t check that out.  We took a overhead tunnel to another mall, which was more in line with what I was expecting – a crowded random collection of different stores.  Some closed, some open. Some I’m not even sure what they sold.  I found a nice bench for Wendy and wandered around, but it grew old after a while.  Somehow we managed to retrace our steps to the skywalk and the original mall and the subway station.  All told we spent about 2 hours there.  It was interesting, but it wasn’t really a highlight of Seoul. 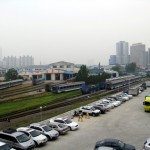 Looking out from Yongsan Electronics Market 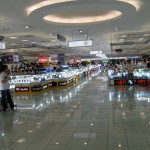 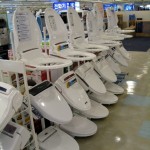 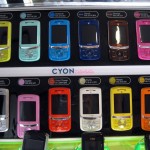 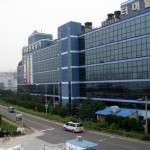 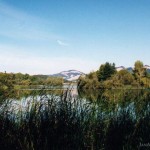